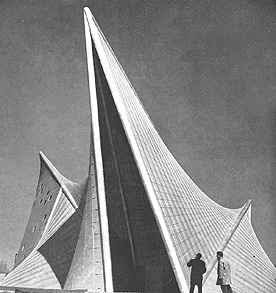 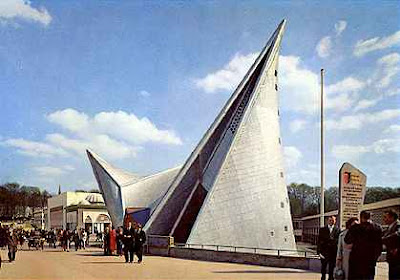 The work of the celebrated Franco-Swiss architect Le Corbusier, this pavilion was, in its own words, "the forerunner of technical progress in the near future". With its curious forms, this experimental pavilion concealed the most advanced techniques of the period. It was composed of 12 hyperbolic paraboloids 5 cm thick and reinforced at their intersection by cylindrical ribs 40 cm in diameter. The entire shell was made of concrete with no supporting structure. It was erected with a large number of prefabricated concrete slabs with the help of 9 mm steel cables. These cables remained visible on the external surface. It was sealed using an aluminium-based paint. The structure and the show named "the electronic poem" presented inside formed a fascinating whole. The show was also the work of Le Corbusier, assisted by the composers Yannis Xenakis and Edgar Varèse. This visual and sound poem paid homage to the birth and development of human genius. After Expo 58, there were calls to conserve this exemplary pavilion. Unfortunately, they were not heard and, like most of the other structures, it was destroyed.

Email ThisBlogThis!Share to TwitterShare to FacebookShare to Pinterest
Ετικέτες Αρχιτεκτονική